MARS 2.0 update processing supports the standard practice of omitting most initial articles even if a nonfiling character indicator has been defined for the field. Initial articles are retained, and the filing indicator correctly set, for the 245 Title Statement and 440 Series Statement / Title Added Entry fields.

The MARS 2.0 Initial Article Table is an important part of the initial article processing routines. A copy is included at the end of this section. It is based on the Initial Definite and Indefinite Articles table.

You can choose to have corporate heading fields checked for initial articles. This MARS 2.0 update processing option examines $t subfield in these fields: 110, 410, 610, 710 and 810.

If $t subfield begins with The, the initial article is deleted and the first letter of the subsequent word is capitalized. Additionally, if the first word is A or An, MARS 2.0 programs include it in the Possible Leading Articles Report (see Step 5.2, Report 14).

MARS 2.0 programs examine field 245 and any 440 fields present in each bibliographic record. MARS 2.0 programs check $a subfield for any initial article in the language of the item (as coded in fixed field 008, bytes 35-37). If an initial article is found in field 245 or 440, the second indicator (Nonfiling Characters) is set to the value in the MARS 2.0 Initial Article Table.

If the field does not begin with an article in the language of the item, and the Nonfiling Characters indicator contains a number, no processing is done. This prevents setting an incorrect indicator value when a heading has been correctly coded for an initial article in a language other than that of the item as a whole.

If the second indicator contains a blank (or any other character except a number), MARS 2.0 looks for the presence of an initial A, An, or The. If the heading begins with one of these three text strings, the heading is included in the Possible Leading Articles Report (see Step 5.2, Report 14). If no other condition is satisfied, a blank Nonfiling Characters indicator is set to zero.

MARS 2.0 initial article processing is fully compliant with the February 20, 2003 Library of Congress change in counting non-filing characters. Diacritics associated with the initial letter of the following word are no longer included in the filing indicator.

Diacritics associated with the initial article and special characters other than diacritics, however, continue to be included in the filing indicator as shown in the examples below:

MARS 2.0 programs do not examine the $p subfield.

MARS 2.0 programs examine the beginning of each instance of these fields and subfields for initial articles:
Subfield $a


For fields that have a Nonfiling Characters indicator defined, the initial word is extracted based on the filing indicator and is compared with all articles in the MARS 2.0 Initial Article Table.

If the initial word is an article:

If the article is not found, MARS 2.0 programs include the field in the Suspicious Filing Indicators Report for local review (see Step 5.2, Report 13).

MARS 2.0 programs use a different process if:

If the subfield begins with The:

Additionally, if the first word is A or An, it is included in the Possible Leading Articles Report (see Step 5.2, Report 14).

This practice is best illustrated by the following examples.

Other helpful examples with and without initial articles (these do not reflect a change in practice):

The LC database is currently being analyzed to identify existing records that need to be changed programmatically as a result of the new practice. LC staff creating or updating bibliographic records in Voyager, RLIN, or OCLC are asked to begin following the new practice immediately.

Note: The following characters can be considered candidates as “the first filing character”:

The table shown on the next four pages Is used in the MARS 2.0 MARC Update processing. It lists each initial article, and the associated filing indicator, by language.

This table is not intended as a comprehensive list, but rather a tool that is used within a specific automated process. Generally, initial articles that cannot be correctly converted in all headings without manual review are not included in the table. 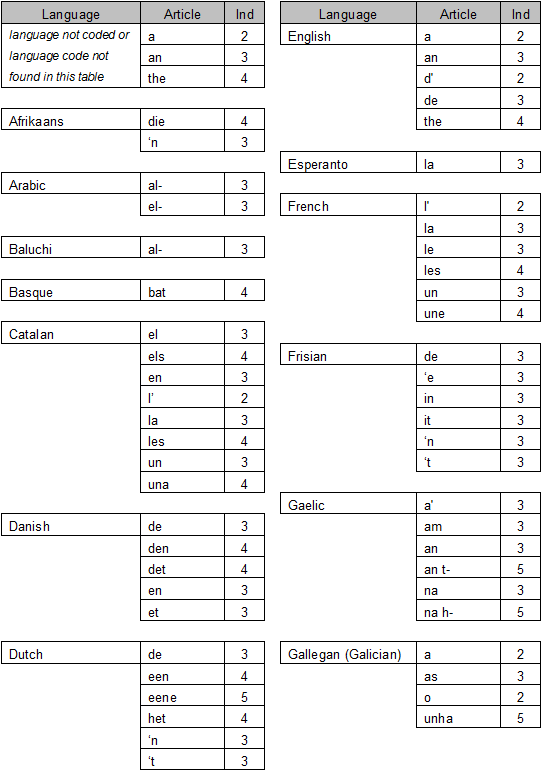 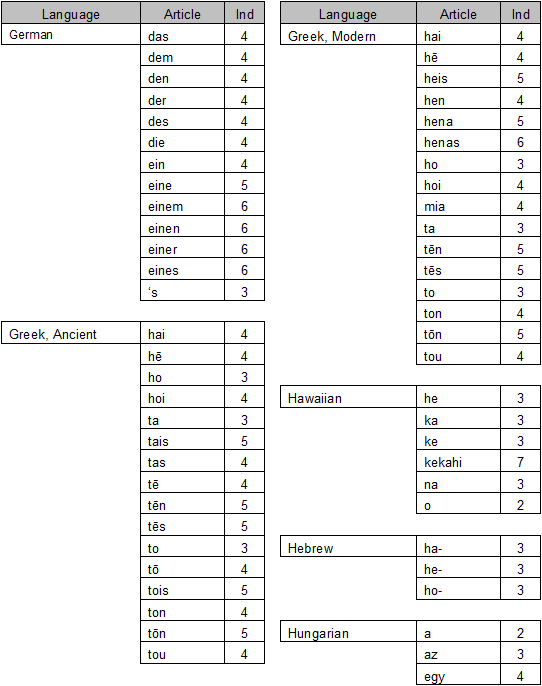 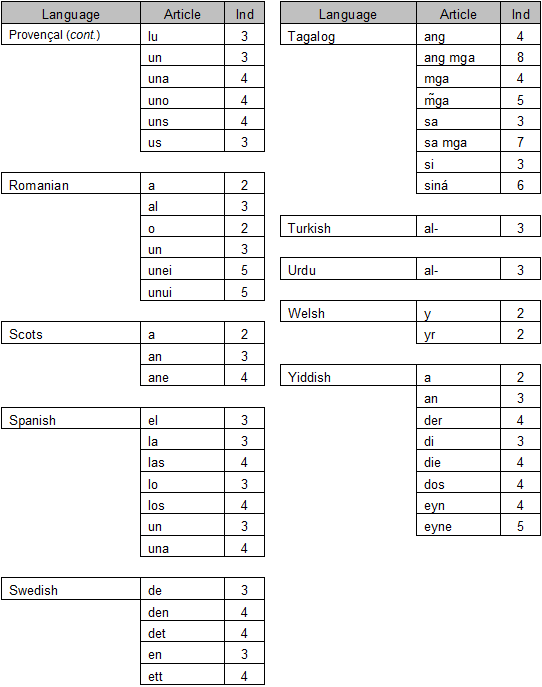 Go to the Previous Section

Go to the Next Section